On the weekend of 29th September, KOA – a team of Suncoast Indigenous Warriors took to the water for the Australian Outrigger Canoe Racing Association (AOCRA) Trans-Tasman Series and Gubbi Gubbi Championships.

Held on the traditional land of the Gubbi Gubbi people at Lake Kawana on Queensland’s Sunshine Coast, this regatta was a friendly event, where boat crews from across the near-Pacific competed. The event referred to as the Gubbi Gubbi Trans-Tasman because it was initially created as a competition between Australia and New Zealand yet now also includes boat crews from the Cook Islands, Samoa, and Tonga.

Suncoast student and Indigenous leader, Samuel Morgan nominated the name “KOA” which means “warrior” in the local, Gubbi Gubbi language. The design of the KOA singlets was inspired directly from Indigenous murals – which earlier in 2018 – were created by Suncoast Christian College Students and local indigenous artists. Then, the various elements were expertly composed by Sunshine Coast advertising agency, Horse & Water.

The boat the KOA Crew trained and competed with is a ceremonial canoe supplied by the Mooloolaba Outrigger Canoe Club. It was generously hand-painted by members of the Nandjimandji Art Group who are a small group of first peoples with disabilities – mainly mature women leaders, elders and aunties based in Marcoohydore. At the opening of the regatta, the ceremonial canoe and the Suncoast KOA Crew were blessed by a member of Nandjimandji Art Group member and Kalkadoon woman, Aunty Robyn (Lennox).

During the regatta, the boys were faced with some tough competition – yet they impressed with their tenacity and good spirit.  Lynda Shannon, Suncoast Secondary teacher commented: “What an amazing weekend, what a fantastic effort and what a great impression our fine young men made on the people at the Trans-Tasman Gubbi Gubbi regatta. The boys bravely stepped out in faith and had-a-go! They represented themselves and Suncoast Christian College with such integrity”.

Jenny Rasmussen reflects on the Crew’s performance: “It was great to see our newest recruits, the Suncoast KOA boys and the amazing effort they put in”

Local Queensland State Member for Maroochydore, Fiona Simpson who attended the regatta opening and blessing ceremony, commented that the Suncoast KOA are “fine young people celebrating culture and sport and working as a team”

The KOA boys were also mentored by Gayle Mayes from Mooloolaba Outrigger Canoe Club. Gayle is a champion paddler and Olympian – having competed in the women’s 500-metre flat water kayak event in the 1992 Barcelona Olympic Games. Suncoast KOA crewman of Ezekiel Bell reflects: “Gayle has been super-supportive of us Indigenous boys…she is very inspirational and tough too – in a good way!”

Lynda Shannon comments “Congratulations KOA lads. I really enjoyed taking you to the Wednesday training sessions and it was a privilege to hang out with you all. Well done”

Suncoast Director of Teaching & Learning and Indigenous Programs Coordinator, Hayley Whitfield discusses the value of engaging and encouraging Indigenous students through initiatives such as the KOA Outriggers: “… it was great to see the Suncoast Koa Indigenous outriggers participate in the Trans Tasman Gubbi Gubbi championships in the holidays. Throughout the whole event from paddling the traditional outrigger canoe as part of the opening ceremony, racing against teams from all around the world and working with other paddlers to pack up, the Suncoast team demonstrated exemplary integrity, conduct, attitude, and sportsmanship. A big thank you to Lynda Shannon, Mooloolaba Outrigger Canoe Club and all the parents and family members who came to support the team.” 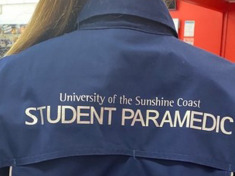 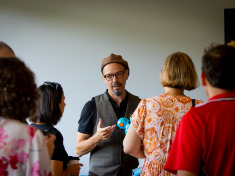 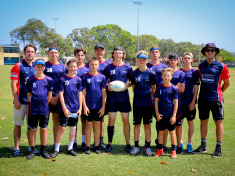 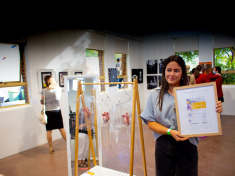