Flavours of the Soul for GOMA

Flavours of the Soul – a work by Year 12 Visual Art student, Amesha McDonald to be exhibited the Queensland Art Gallery of Modern Art (GOMA).

Suncoast to Cooroy to GOMA

Amesha McDonald and fellow Year 12 artist, Caitlin Jacobs both entered works at The Excellence Awards Exhibition, the Cooroy Butter Factory Arts Centre, in October 2019. This exhibition featured the best senior artworks from all Sunshine Coast schools, and Amesha’s work ‘Flavours of the Soul’  selected as one of five best from the Sunshine Coast. These five local works were subsequently competing with 70-80 of the best student works from across Queensland – for one of 33 places in the 2019 Creative Generation Excellence Awards in Visual Arts at Gallery of Modern Art (GOMA) in Brisbane from April to August 2020.

Suncoast Christian College Visual Arts Teacher, Bindi Brien comments: “Both Caitlin and Amesha are a great example to their peers and the younger art classes, demonstrating that both through hard work and inspired thinking, great things are possible.

Since 1990, the program has helped raise community awareness of the degree of sophistication in concepts, diversity of technical competence, and the high standard of visual art education in Queensland secondary schools. Amesha was one of five successful applicants on the Sunshine Coast.

Bindi Brien comments: “It’s an incredible achievement for Amesha. The exhibition is the pinnacle of the Awards, which recognises excellence in senior visual art education throughout Queensland state and non-state schools. 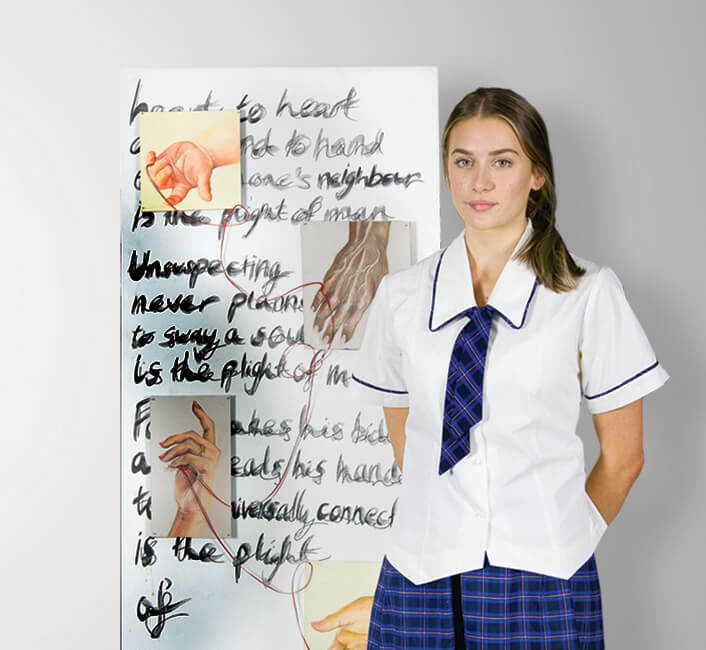 Flavours of the Soul

In her Artist Statement, Amesha describes her work as “the nature of identity as defined by the internal and physical traits of an individual and how they are stereotyped based on physical assumptions. Our genetic make-up determines our outward appearance, but the environment in which we are shaped in decides our conscious, our ‘flavour’. Much like a person’s identity, the most important part of the food is the taste. A peach might be known to be sweet and vibrant, but if grown in an unhealthy environment could be sour or rotten at the core. The collection of singular produce, revealing their flesh, compared to each other.”

Bindi Brien comments: “We are very proud of Amesha, not just for her accolades, but for the hard work she has invested in producing creative artworks. She consistently works long hours practicing techniques, investigating other artists, and planning her work. We are proud of her for that.”

Caitlin’s work ‘Red String’ investigates the Japanese myths that we are all connected and questioning how God created both people, both different yet connected. Bindi Brien comments: “Caitlin’s work consistently demonstrates her astute creative thinking. She looks into other cultures and investigates things and questions how and why people do things they do? She synthesises ideas and comes up with a brand new thought herself.”

To view Caitlin and Amesha’s awarding-winning works, visit the Suncoast Christian College Library. Be quick, though, because Amesha’s work is soon off to GOMA! 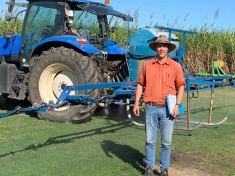 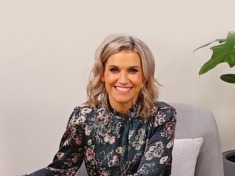 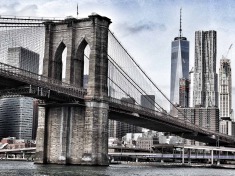 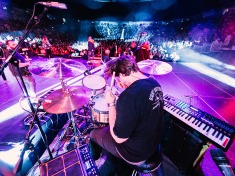